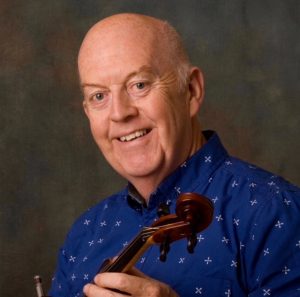 Manus McGuire is an extraordinary fiddler. Sligo born, now resident in East Clare, he grew up in a rich musical environment. Together with his brother Seamus, he was ideally placed to carry on a fiddle tradition made legend by Michael Coleman, James Morrison, Paddy Killoran and Lad O’Beirne.  Manus is the recipient of the Male Irish Traditional Musician of the year from the Irish American News, and winner of the Fiddler of Dooney contest, among other awards.  He is well known and well respected for his recordings, solo, duo, and bands including Buttons and Bows, Moving Cloud, and Brock McGuire Band. In addition to a busy performing schedule, he also teaches fiddle at intermediate and advanced levels.   www.manusmcguiremusic.ie

McGuire manages to capture the energy of a live session while never sacrificing the finesse of the playing: a rare feat but one he achieves with seeming effortlessness. Siobhan Long/ The Irish Times

Guitarist Joseph Carmichael has spent the past several years collecting an impressive resume in the world of traditional music. An in-demand accompanist in a wide array of Celtic and folk styles, he has performed with such musicians as Brendan Power, Cormac De Barra, Buddy Connolly, Oisín MacDiarmada, James Kelly, Liz Carroll, John Williams, and Mari Black. His primary project for several years, folk trio Flashpoint, opened for bands such as FullSet and the legendary Solas.  Joseph has toured with singer/songwriter, Ashley Davis, and internationally acclaimed musicians, Hanz Araki and Colleen Raney, as well as a special performance in Cavan with Gregory and Alex Grene of the Prodigals, for The Gathering in 2013. More recently, Joseph has joined forces with Austin musicians Chris Buckley, Rob Forkner and Niamh Fahy as The Here & Now, recording two albums with the group.

May 2020 TOUR CANCELED due to pandemic. Will try again when the fates allow