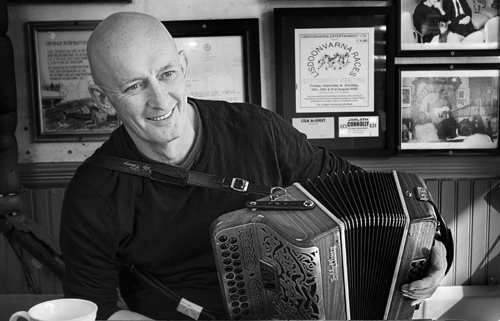 Box Sets is full of simply beautiful music – a stunning and evocative love letter to John’s friends and family, and to the world around him.  Daniel Neely, The Irish Echo

John Redmond is an all-Ireland champion on button accordion, from Ballindaggin in County Wexford. A longtime resident of New York, he is one of the city’s most respected Irish musicians and a key player in the best local sessions. His new CD, Box Sets, a luminous collection of his own compositions, is a testament to the places that have shaped his life and his art, and to his incredible skill as composer and musician. John has performed with many greats over the years including Kevin Burke, John Doyle, and Cillian Vallely. He is in demand as both teacher and performer, at festival and concert stages across the US.

Make no mistake, this guy can play the box. Box Sets is a stunner and a keeper! Bill Margeson, LiveIreland.com

I hope John is delighted with the way this CD turned out. He certainly should be as his impeccable playing is only matched by his wonderful compositions. A remarkable feat.   Kevin Burke

The tempo of Redmond’s playing is never hurried and, more important, never barters vitality for mere virtuosity… spot-on, each note cleanly executed and then strung together to form a sum larger than the parts… Earle Hitchner, review of East to Northeast, The Irish Echo

John is available by arrangement solo, or with an accompanist. Contact Ruby for availability.